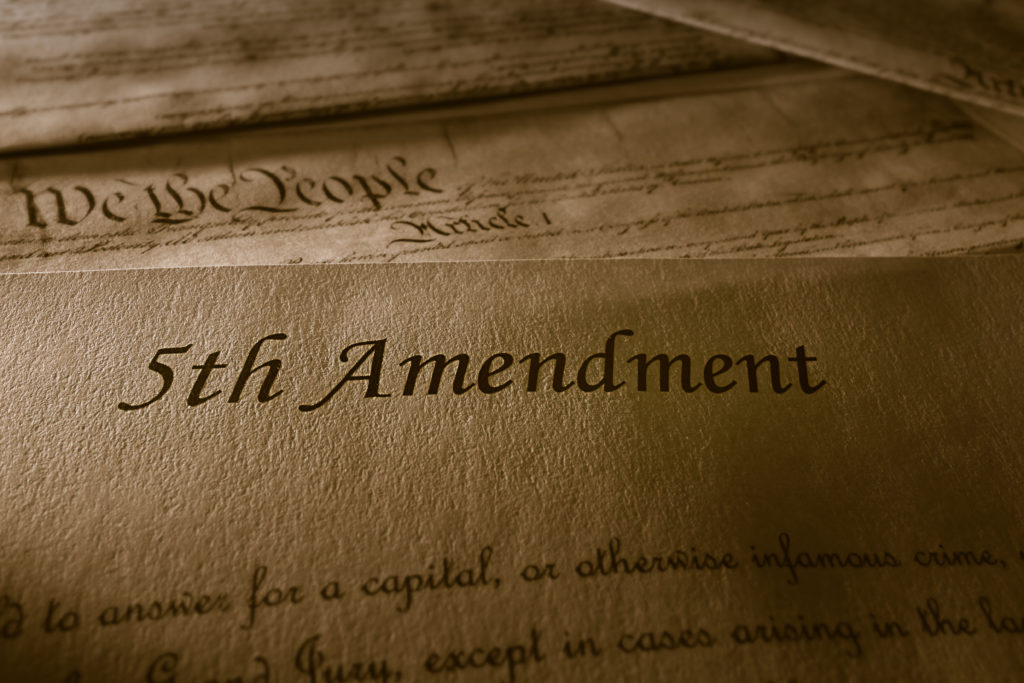 Likely you have heard it in a film or one of your friends has jokingly said, “I plea the 5th,” when not wanting to answer for something they’ve done. It’s become part of the common vernacular and one of those things we all say jokingly or not, when we feel we don’t want to incriminate ourselves. And while we all say it, we may not always be aware of its history and its purpose in our justice system. So let’s take a look at the history and background of this amendment, what it means, and how it made its way into the Bill of Rights.

Our job is to help lawyers prepare for trial. The basic rights outlawed in our Bill of Rights and Constitution are therefore our foundation as well.

The Fifth Amendment of the Constitution states:

No person shall be held to answer for a capital, or otherwise, infamous crime, unless on a presentment or indictment of a Grand Jury, except in cases arising in the land or naval forces, or in the Militia, when in actual service in time of war or public danger; nor shall any person be subject for the same offense to be twice put in jeopardy of life or limb; nor shall be compelled in any criminal case to be a witness against himself, nor be deprived of life, liberty, or property, without due process of law; nor shall private property be taken for public use, without just compensation.

There are a lot of things happening there, many of which are important to any person who finds themselves involved in the justice system. Not unlike the First Amendment, the Fifth Amendment contains several distinct but related rights.

The clauses that are outlined above will outline and set limits on police procedure. This means they are there to protect accused persons or people that find themselves on trial. The Grand Jury clause and the Due Process clause come from the Magna Carta. You might remember that the Magna Carta is one of those monumental documents in history. It establishes the idea that everybody, including the King, was subject to the law. It also guarantees the right of all free men the right of a fair trial. We don’t think much about it today, but this was a monumental development and one that should be cherished and protected because it makes sure no one could simply be accused by a government and put in jail without just cause. This document remains a cornerstone of the British constitution. The entire document provided a framework, and to some extent a foundation, to the relationship between the king and his subjects.

The first clause about the Grand Jury ensures that if the government is taking an individual to trial, they must have enough evidence to present to the case. If the grand jury agrees, it issues an indictment, which then permits a trial.

The Double Jeopardy Clause — Not the Film!

The second clause or section is what is referred to as the double jeopardy. You may remember there was an adventure crime thriller by the same name that touched on the nature of the concept in a somewhat unorthodox way. It starred Tommy Lee Jones and Ashley Judd. The premise of the movie was a woman who was framed for killing her husband. As it turns out later, he is alive. So the movie suggests the woman is free to kill her husband with no repercussions. The biggest inaccuracy here is that if the second crime did not take place at the same time and location, it’s technically not the same crime. Therefore, the film does not fully capture the concept of double jeopardy accurately, although it’s a fine entertaining flick.

The real Double Jeopardy clause protects citizens against being prosecuted after an acquittal or conviction for the same offense.

The Clause That Protects Against Self-Incrimination

The clause of Self -Incrimination. This is the one that most people associate with the fifth amendment. This clause protects people from being forced to testify against themselves in a trial. The idea plays off of the central concept that in the U.S justice system, the person is innocent until proven guilty. Therefore, it is up to the state or the government to prove the case. They have the burden of proof. It is important to note, however, that certain information collected during an investigation, such as tapes, police lineups, etc is constitutionally permissible.

The Due Process Clause — Right to Life, Liberty, and Property

And where would we be without the Due Process clause? After all, it’s the guaranteed right to due process that makes our justice system fair. This clause protects citizens from having their life, liberty, or property taken away or confiscated without robust safeguards. In other words, it means that the government can’t just come to your house and put you in jail without cause or trial.

Court trials can get complex. One of the most difficult aspects for attorneys and lawyers is dealing with the jury and finding ways to communicate effectively and allow them to see the evidence with their biases aside. Finding your theme and sharpening your arguments is another big task for lawyers in a courtroom. That’s why we’re here! We are intimately familiar with the justice system and the court process in this country and we help you come prepared for your day in court. Call Jonahtan Leach, LLC today.

« Trial Themes: How Using an Effective Narrative Can Save Your Case
What We’ve Learned About Juries and Why the Sixth Amendment is Key  »